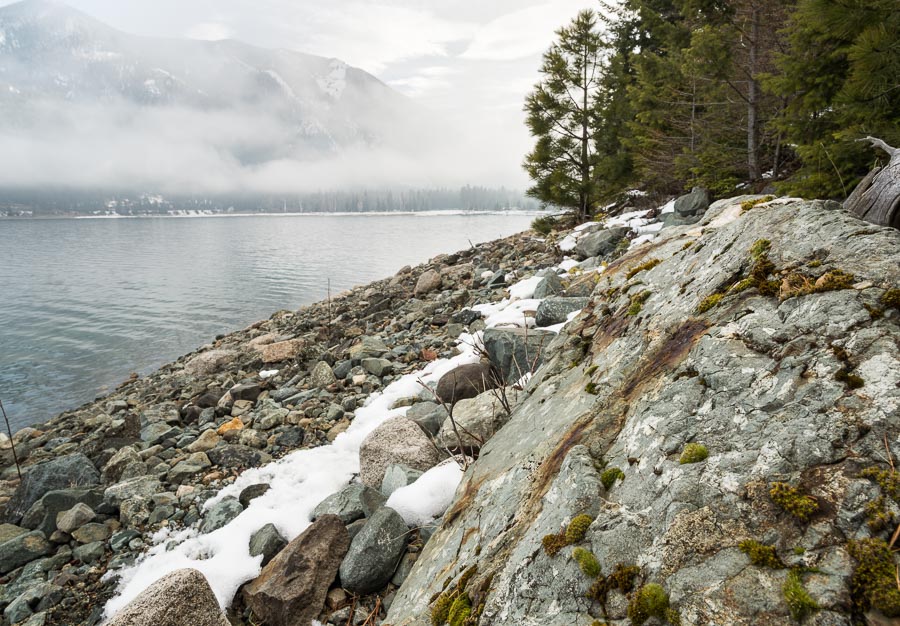 As a memorial to their mother, three brothers have donated a piece of family history to Wallowa Land Trust. Thanks to the generosity of Fred, Steve and Frank Kimball, a stretch of Wallowa Lake shoreline will remain in its natural state in perpetuity.

Fred Kimball says that in the early 1950s his father received the lakeside property as payment for legal fees. The property reached from the Wallowa Lake Marina at the south end of the lake to Trouthaven, a guesthouse on the lake’s west shore. According to Fred, “He took 15 acres and sold the remaining to Clyde Harris of Harris Pine Mills.”

For more than 60 years the Walla Walla family has enjoyed their lakeside get-away, but Fred says the family’s relationship to Wallowa Lake dates back to early in the twentieth century. “My grandfather’s parents and grandparents used to camp all summer at the head of the lake to get away from the heat - before the dam was built.” In 1956 the brothers’ father built a cabin on the property as a 25th wedding anniversary present to his wife. For a while the family had a dock and a boat at the cabin, but unpredictable windstorms prompted its removal.

In 2013 the three Kimball brothers began working with Wallowa Land Trust to keep the cabin along with four acres, and donate the remaining nine acres to the Trust. Fred says the gift fits with the family’s sensibilities. “We love the privacy and beauty of the Wallowas and we wanted to give something back to the county in memory of our mother. We are really pleased to keep that native Wallowa look and know there will be no development.”

According to Fred, it’s not just the beauty of Wallowa County that has the family so invested. “We feel very strongly about preserving the appearance; but we like the people over there – they are real individuals and believe in freedom. I’ve taken the Chieftain for a jillion years and look forward to getting it.”

The property has 1,500 feet of shoreline lined with ponderosa pines. Current zoning would allow at least four homes along the property, making it highly desirable for development. However, now that Wallowa Land Trust owns the land, no development will occur and it will be managed to maintain and enhance its natural features and habitat.

“The Kimball brothers were clear from the beginning that they didn’t want to see houses on the shoreline and wanted to keep the forest and springs intact. I’m so proud we could help them fulfill their dream,” says Wallowa Land Trust’s Conservation Director Julia Lakes.