“The moraine is very important – there’s nothing like it on earth,” Quint said.

The property encompasses two lateral moraines before rising to the crest of the East Moraine at its westernmost boundary, where it abuts the Ham Family Conservation Easement, a 52-acre easement completed by the Ham family and Wallowa Land Trust in 2017. The Ham and Quint Conservation Easements are part of a larger effort to conserve nearly 2,500 acres across Wallowa Lake’s East and Terminal Moraines.

Considered the southern tip of Zumwalt Prairie, Quint’s property is comprised of 53 acres of cropland and 122 acres of bunchgrass, including habitat for the ESA-listed herbaceous wildflower, Spalding’s catchfly, as well as critical winter range for mule deer and habitat for fox, coyote and a variety of grassland birds and raptors, among other species. Quint also reserved the right to graze cattle on the property as well as farm, citing working lands as a big part of her Wallowa County heritage.

Quint, 85, of Redmond, grew up on the southern edge of Joseph in a house her parents bought when she was in elementary school. Her father grew up on a ranch outside of Joseph on Walker Lane.

“My grandmother and grandfather came into the county in a covered wagon from Gilliam County and homesteaded on Sheep Creek,” said Quint.  Marriage and children quickly followed Quint’s attendance at Oregon State University, and she and her husband, an engineer, settled in West Linn.  Despite the long drive, the family spent most of their free time in Wallowa County. After Quint’s mother’s home was sold the family continued to gather in Wallowa County. “My husband and I would take the kids out and walk those hills,” she said.

Helping conserve the moraine was important to Quint long before Wallowa Land Trust was formed. She said a proposal several decades ago to build houses on the north end of the moraine near the county boat launch prompted her to write a letter in opposition. More than 10 years ago, Quint and Wallowa Land Trust began discussing the idea of putting the property into a conservation easement.  A conservation easement is a voluntary legal agreement between a landowner and a land trust which protects a property’s agricultural viability, natural habitat, rural heritage, and/or scenic open space in perpetuity.

The conservation easement that now encompasses the Quint property permanently extinguishes all development and subdivision rights while reserving recreation, hunting, farming, and grazing rights - a testament to Quint’s commitment to protecting this iconic landscape for present and future generations. 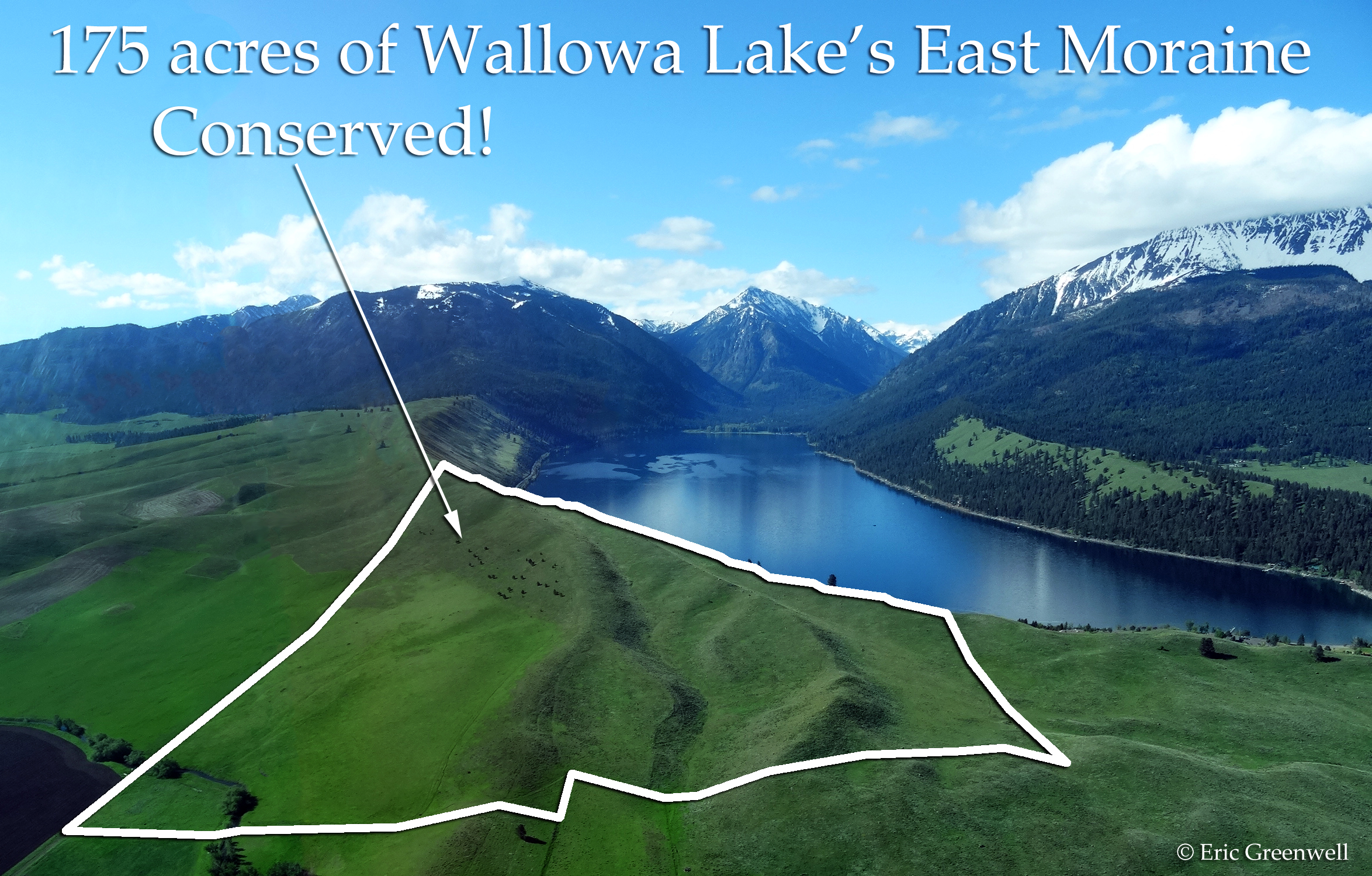 Special thanks to Andy McKee, the pilot who volunteered to take Wallowa Land Trust up in the air for this beautiful photo of the Quint Property!